In Seattle I saw bumper stickers to give cyclists three feet of clearance when passing, but apparently it isn't the law in Washington or Oregon, both considered advanced in this area. (It is the law in Maryland, but not DC or Virginia.) 3feetplease.com is one of a number of sites advocating this law, although they seem heavily focused on selling jerseys to support their cause.

One problem seems to be that some see a contradiction between having laws allowing bicycles to use a full lane as needed and a three foot clearance requirement - see this article about Hawaii, for example. And what is the point of dedicated bike lanes if passing vehicles must clear bicycles in them by three feet - apparently motorists are expected to give three feet of clearance then too says this article.

Sign in Arlington VA reminds motorists that bicycles are entitled to the full lane - the bicycle "may use full lane" (or may not . . . ) ~ 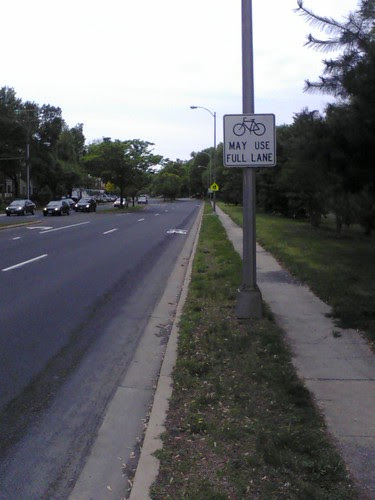 Posted by michael neubert at 6:48 AM