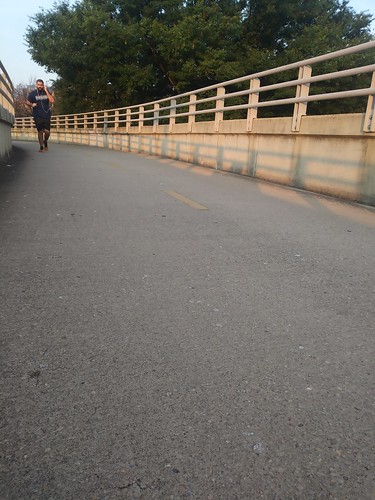 If you click on the photo you can see a bit more of the glass, which in this image isn't that bad looking. Some days there has been quite a bit more than this.

There are three different overpass bridges on this trail near National Airport. Since the beginning of June there has been new glass appearing on one or another of these bridges at least once a week and sometimes more often. One sees cyclists pulled to the side of the trail changing flats (not surprising) as a result. It is obviously malicious since it happens over and over with the same kind of clear glass each time, spread across the trail. There are never sizable chunks of a bottle as you usually see with a broken bottle. There have been several dozen different times glass has appeared anew.

The clever aspect here is that on this part of the trail, given how the bridges are constructed, there is no place for the glass to go unless it is swept up by someone.

I have regularly sent email reporting this to the contact email on the web page for the Park Service people for the GW Parkway. Apparently they are able to send someone out to clean up much of the glass but sometimes it takes a day or two. It is quite . . . annoying. (To clarify - it is annoying that someone keeps putting broken glass on the trail, not that it may take a while for the NPS to clean it up. The NPS is not funded to sweep the trails on a daily basis!)

Quite a few cyclists don't seem to see the glass, even when it seems very noticeable to me - they go riding on through it at speed. I slow down and sometimes walk the bike through it.


Posted by michael neubert at 7:03 PM