It was a bit chilly for Washington today, but I wanted to test out some different cold weather gear and went for about a 7-8 mile ride in the middle of the day. It was around 18 F or about -8 C - my winter stuff worked OK to keep me warm, but riding back I was a little slowed by a steady cold wind. Ugh.

But this weekend in Moscow there was a winter "Velo-Parade" that was held despite unusually cold conditions there (even for Moscow) with a ride-time temperature of -27 C, or about -17 F. Yikes! I guess I have nothing to complain about. 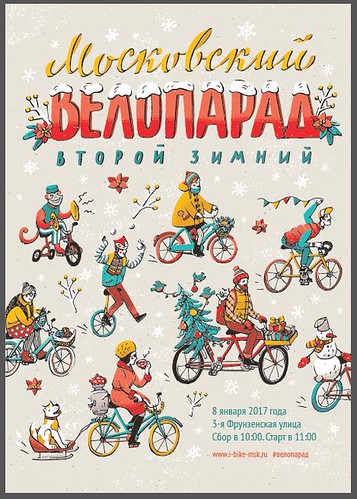 Poster available to print and post from one of the event organizers, http://i-bike-msk.ru/

There is this story in Russian, from the Russian News Agency TASS. There is a shorter version in English. It says in English, in an example of less than great translation, that the participants were "recommended to be accurate" which in Russian was really something like they were told be careful. Perhaps a machine translation. There were about 500 participants. The "Ministry of Extreme Situations" (which is a Russia national agency for emergency response; basically some EMTs) was at the start and finish, but apparently no one needed assistance. This was the second such "winter bicycle parade;" the first one in 2016 had about 3,000 riders but the weather was more seasonal (again, for Moscow) although of course still below freezing. More seasonally appropriate "bicycle parades" have been organized in May in Moscow for several years, as well as in a few other cities. These events are in support of (Russian) public awareness of cycling and advocacy for more cycling infrastructure. The events are not races but more of a fun ride, although in this case, in rather extreme (for most) conditions. This winter ride seems to have been about 6 kilometers each way, along the embankment of the Moscow river, or (coincidentally) about 7.5 miles, just about what I rode today in (by comparison) almost tropical conditions.


News video from MetroNews.ru (in Russian) of this winter event


Московский Велопарад 2016 from Let's bike it! on Vimeo.

Organizer produced video of the 2016 spring Velo-Parade in Moscow, in late May

Posted by michael neubert at 7:31 PM