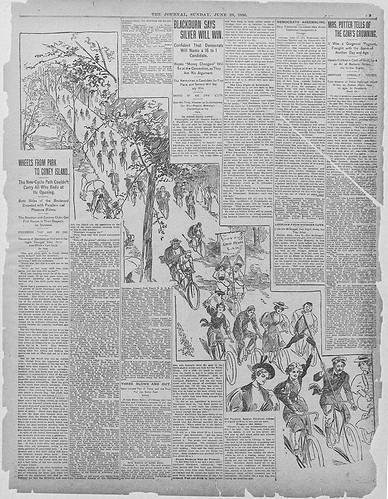 Although about NYC and not Washington DC, an amazing article about the popularity of cycling in 1896, the high point of the 1890s "cycling craze."


WHEELS FROM PARK TO CONEY ISLAND-The New Cycle Path Couldn't Carry All Who Rode at Its Opening-Both Sides of the Boulevard Crowded with Paraders and Pleasure Riders-The Brooklyn and Century Clubs Get First Honors in Their Respective Divisions-PROCESSION THAT HAD NO END-Thousands of Spectators on Foot and in Carriages Thronged Every Point from Which a View Could Be Had.

"I thought there was one alongside the driveway," said the horseman.

"There was, but this is a new one on the other side."

"What do you want with two cycle paths, you can only ride on one?"

With this crushing retort he of the horse moved away. If he had gone down the Boulevard yesterday he would have learned why two cycle paths were necessary.

There was a procession on the new path parade of 12,000 wheelmen and wheel women-more bicyclists probably than ever got in line before. The old path was just crowded. The whirr of the wheels, the crunching of the powdered rock, the flashing of the polished spokes, were just as continuous on the old path as on the new. Except for the absence of the banners and the way the grand stand faced, you could scarcely have told whether the greatest bicycle parade of this whirling time was on your right or on your left. Indeed some of those who started as paraders wound up as ordinary wheelmen, just bicycling because the roadway was hard and smooth.

The sky was fleecy, and the day fitted the flying sport like moonlight does love making. These last cyclists came too late to find their places in the long line, and rather than mix up the regular order of things they bolted as completely as the silver delegates did at St. Louis. They defiantly wheeled down the wrong side of the road, crying their war whoop and bidding the spectators look at them and not at a side show.

But all the world was not on rubber tires, though from the appearance of the streets and roads leading to the big meet it might have been supposed to be so. The Boulevard was crowded with carriages, coaches, carts and horse men and women, wherever it commanded a view of the new path. One big coaching party afforded a beautiful demonstration of the burial of long cherished animosities. Half the girls on the coach wore bicycle costumes. Piled upon the rear seat were three of the machines. The coaching horn hung in the case beside a bicycle bag. The outfit was not wheelier than it was horsey.

In the grand stand south of Avenue C there was a big holiday crowd, as enthusiastic as the baseball crowds used to be in the good days now gone beyond recall. The stand itself was a blaze of color and a blare of music. There were flags all over it, but the flags and banners were not brighter than the dresses of the women-for dress it was Suburban Day over again. When the music could be heard, which was during the gaps between favorite clubs in the parade, the children about the grand danced among the horses and carriages.

In spite of the crowd, fortunately no one was seriously hurt-not even a policeman.

It is only six weeks since work was begun on the path that was opened yesterday. It was a trifle slow, and punctured tires were not infrequent, owing to the sharp particles of pulverized rock. A few showers and a few days' riding will leave the roadway beaten down hard. Then there will not be a finer stretch of travelling country in the world than the five and a half miles of the new bicycle path to Coney Island.

The popping of the tires furnished the comedy element of the day. The crowd got to watching for them when the gasp of the punctured tire died on the Summer air and the far-away look came into the rider's eye the spectators on the edge of the track shouted cheering words to him In this manner:

"Keep off the grass!" shrieked a thousand men when a chocolate costumed young man, who had been riding with his hands off the handle bars, hurtled through space and hit the lawn.

Such things as punctured tires and eccentric tumbles were the only accidents of the day worth recording, and they were not frequent enough to more than properly season the general enjoyment of the day.

There were three divisions in the procession: Brooklyn clubs first, then New York clubs, and last New Jersey and other clubs, Good Roads associations, L. A. W. and unattached wheelmen.
It was not intended as an ornamental parade and the decoration of wheels was discouraged, but a few flags and flowers managed to get into the procession, particularly among the spokes of the wheels ridden by women. Noticeable as a feature of the day was the prevalence of bloomers. The advanced costumes were fully as numerous as the skirts and they got more applause.
There could not have been a prettier sight than the seemingly endless procession wheeling down the splendid path under the flags between the green lawns. It was no wonder the paraders swung their caps and cheered all the way.


The article continues with a long list of individuals and organizations that received various recognition. Quite an amazing description. 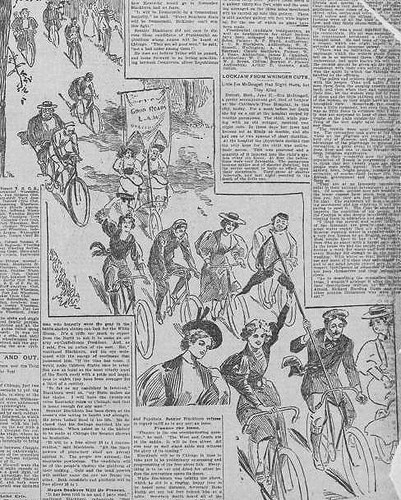 Posted by michael neubert at 5:57 PM