Predictable-Alert-Lawful on Your Trail, in Your Neighborhood 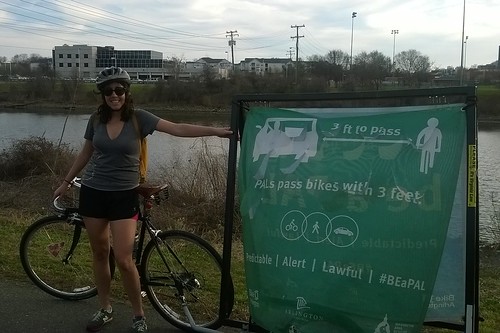 On my way home Thursday, it was surprisingly windy given that weather.com suggested a SSW wind of 10 mph. I was surprised to find the young woman above walking her bike that has a PAL - predictable, alert, lawful - billboard-trailer. Apparently despite the holes cut in the fabric to let the wind through, it doesn't do well in a crosswind. If the thing blows over, she would get pulled over too, so she was walking. I guess she does this as a volunteer? Or someone pays her to ride around Arlington trails with this thing? This isn't the first time I have seen her, just the first time I have seen her walking. One odd aspect is that when riding along and seeing her coming the other way, or passing her, there is no time as a cyclist to read her trailer-billboard. So I sort of don't understand it.

I don't know if other jurisdictions have this PAL slogan and campaign or not. Somehow to me it comes across as a little too focused on illegal cyclist behavior or that assumption that if only cyclists would clean up their act everything would be fine. They endorse the following PSAs.

The problem I have with this logic is that the parallel would be that since motorists have pretty good protective metal boxes around them, it's OK to be a little free and easy with the obeying the traffic code.


Illustrates the classic "right hook" threat to cyclists from motorists

It's interesting that even the demonstration of how it should be done, turning behind the cyclist, results in the car rushing up directly behind the cyclist in a way that would not be great to experience. Better than being cut in front of, yes, but not great.


Motorists in cars should look before opening the driver's side door

These PSAs make good points, but for me there is usually something off about them. In the last one about avoiding getting doored, the third scenario suggests that in the end you should ride in a bike lane well away from the parked cars, presumably because the motorists may well not check before opening a door. In other words, in the end it is all on you Mr. or Ms. Cyclist.

And for whatever reason I end up grinding my teeth a bit whenever I see reference to this PAL campaign (which fortunately isn't often - they seem to have taken the ads for it off the County transit buses). "Predictable" is fine as advice, although it is clearly more about cyclists than motorists. (In fact, most of the predictable motorist behaviors are the ones we don't want, like opening doors without looking or cutting off cyclists with right turns.) "Alert" seems to be because they needed a vowel. Because otherwise, duh. Alert. Yeah. But it is the "lawful" that annoys me most, but I suppose as much as anything because it makes no grammatical sense. What they mean is "law abiding" but I guess that is two words.

ADDENDUM: BikeArlington read this and says: I also saw your latest post on the PAL trailer. While [the PAL trailer-bike and rider] does ride on the trails, her primary focus is to connect with motorists. She’s frequently camped out along the Mount Vernon trail to interface with traffic moving slowly on the GW Parkway.

The idea behind the PAL campaign is that it’s designed to be targeted towards all mode of travel. We recognize that pedestrians jaywalk, that people on bikes will run red lights, and that motorists will speed and text. We don’t assign blame to anyone in particular, but rather just point out that if everyone travels in a manner that is predictable, alert and lawful, that we would have much less conflict on the streets.