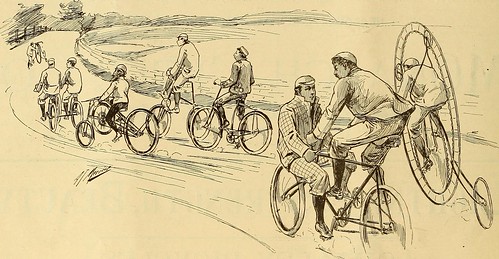 This is something a cartoon in the March 3 1893 issue of the "Wheeling and Cycling Trade Review". At this point inventors were constantly developing, patenting, and trying to sell innovative new bicycle designs of all sorts. For the bicycle trade generally this was likely a little tiresome, thus the attempt at something like humor.


A Kickstarter for an innovative bicycle design that is a little too innovative, apparently, judging by its lack of success.

It probably would have surprised the cyclists and bicycle sellers of the 1890s to learn that people are still trying to overhaul the basic design of the bicycle today.

Posted by michael neubert at 12:34 PM