A short piece looks at the "bicycle of the future" published in the Washington DC Evening Star, August 14, 1897. I have reproduced here just parts of the article, which speculates on what will be the "radical" changes in the design of the then-named safety bicycle (essentially the same basic bike design used today). After a ten year period of introducing and perfecting this design, including the introduction of pneumatic tires, it was apparently assumed that there would continue to be innovations of similar significance.

By many it is predicted that the bicycle of the future will be a radical departure from the wheel of today. As near perfect as the wheel of today may be, it is not so perfect that improvements cannot be made in it. This has been the invariable rule of mechanics, and the bicycle can hardly prove an exception. Stimulated by the demand of the public for something better, the manufacturers will endeavor to put an article on the market to meet the popular taste. As it seems at present, there is no need for any improvement, yet there are many who are demanding something unique and novel in the line of bicycle construction, and the manufacturers find it a lucrative investment to gratify the whims of this class.

Arguably the most significant statement is at the end - the market for bicycles at the then prevailing prices was apparently satisfied, so the manufacturers were hoping that some new enhancement would allow them to sell new and (literally) improved bicycles even to persons who already had one but would feel a need to have a new one that was clearly better.


The diamond frame has been recognized as the strongest combination that could be made for bicycle construction. It has stood the test well, but now the demand is for something different. Accordingly, the triangle or pyramid, frame wheel has made its appearance. It may be several years ahead of its day, as popular fancy has not taken to that style of construction as yet. This is only one of the most prominent departures from the present style of bicycle frames. There are innumerable designs on the market, but they are either lacking in some qualities, or else do not equal the present style in weight, and are therefore objectionable to riders. No cyclist is going back to a thirty-pound wheel after having pushed a twenty-pound or twenty-two pound wheel for several years. It would be a foolish move, indeed.


Within the past three or four years there have been no improvements in the general design of the bicycle. The improvements that have been made are mostly in the line of detail, though In this direction some wonderful strides have been made. The number of changes in this direction are too many to mention here. The weight of the wheel has been reduced to a point undreamed of four or five years ago, until The Friction Ch. today the factor of safety Is the smallest known in mechanical construction. The tires have been wonderfully improved upon, and the matter of repair brought into the hands of all riders.

The tread has been brought down to a scientific basis. The bearings have been made as near perfect as is possible, though it is admitted by all bicycle experts there is plenty of room for improvement yet. The bearings have also been made as near dust proof as possible, while arrangements for the chain adjustment have been patented by a number of people. The cranks and sprockets have been brought down to a scientific basis also, and innumerable other smaller details have been looked after. all tending to produce the bicycle of today. If one make of wheel had all the improvements on it we would have a model bicycle, but as it is the improvements are scattered over a number of different makes and as a result no particular wheel is perfect. 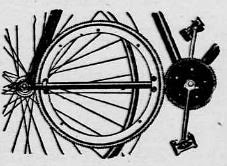 The article goes on to suggest that a likely place for innovation would be to replace the chain with some other kind of "chainless" drive system, although the article dismisses shaft-drive approaches (which were marketed by a number of companies and still exist today) in favor of exotic approaches like the cog-based approach shown above, even as it admits that this system has some drawbacks.

Somewhat oddly, on this same page in the next column over from where this article appears, in a collection of short items called "Cycling Chat", a Professor Carpenter from Cornell University is quoted saying, "no better power conveyor can be found than the chain that is today in use on the bicycle" - he discounts the greater efficiency from chainless systems.

(The next post takes a further look at the "bicycle of the future" as described in 1901.)
Posted by michael neubert at 7:41 PM