My local bike shop (that isn't a national chain) says on their web site that "bikes are the perfect gift for kids" - but then the photograph they have of happy kids with their new bikes shows them in summer. On the other hand, the best bike I ever received as a gift from my parents was a Christmas present . . . I guess there is nothing to be done about the disconnect between bicycles as presents for kids and December weather (at least where it isn't typically that warm in December).

In the 1890s bicycle sales focused heavily on adults - until the collapse of the bicycle market around 1897-98. After that apparently interest in sales to children (or anyone!) for Christmas grew, demonstrated in the Washington DC newspaper ad below from 1903. 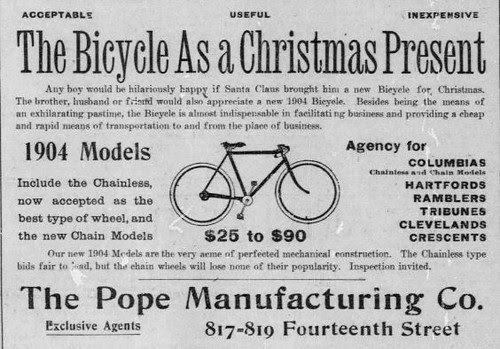 The ad copy isn't particularly good - "any boy would be hilariously happy if Santa Claus brought him a new bicycle for Christmas" - perhaps the phrase "hilariously happy" made more sense 110 years ago. It's also unclear why the effectively exclude girls - presumably there were girls bikes for sale. 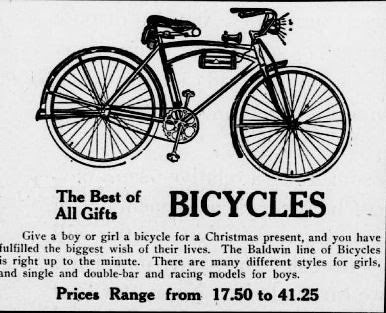 Above is part of an ad from a newspaper in New Orleans in 1922 - more what one would expect. Of course today it would be rare when a parent would think that a bicycle as present would "fulfill the biggest wish" of the child receiving it. 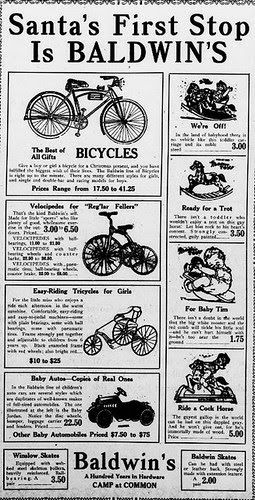 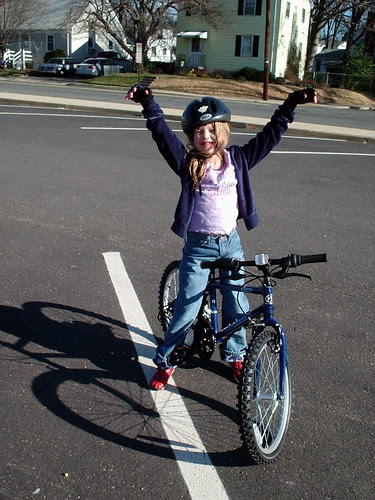 My daughter, some years ago, and her Christmas present bike


Posted by michael neubert at 6:45 PM