Who's Buried in Grant's Tomb?

So here is an item from the Library of Congress with more quite a lot of metadata, but somehow I had not noticed it while searching for "bicycles" but found it while searching for "cycling" - the title is "cycling" so it came right up. (I confess, as photographs go, it isn't much . . . ) If I understand the "summary" correctly, this item is likely a posed photograph in order to create the cover of some sheet music.

Alas despite all this metadata, one searchable term is misspelled - "tandem" bicycle is rendered as "tanden bicycle" - when (or it feels like, if) I get back to working I will suggest it is corrected. (Somewhat to my surprise, we have a photograph of Danny Kaye riding a tandem bicycle from 1958 available publicly. Anyway, a search on loc.gov of "tandem bicycle" does bring up results, just not this one.) The digitized item showing a couple riding in front of Grant's tomb was made from a copy negative - that is, it is a copy of a copy - which explains some, but I suspect not all, of why it isn't a digital image showing much detail.) 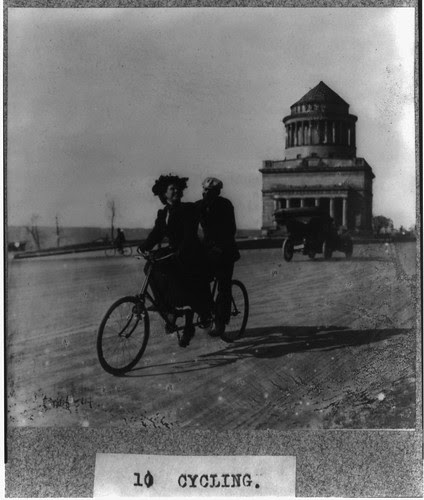 Riding in front of Grant's tomb

Posted by michael neubert at 2:27 PM