An 1895 article concludes regular cyclists may suffer from a general vibratory condition which is mischievous and may develop an intoxication of movement among other problems. . .

The usually fee-based JSTOR has articles that are in the public domain loaded in the Internet Archive text section which is nice but they aren't particularly searchable, other than minimal metadata such as journal title, article title and author.

For example, I bumped into the article "What to avoid in cycling" from the North American Review, published in 1895. For whatever reason, the Internet Archive only gives the volume number (161) that tells you this was published in the 161st year that this journal was published, but not what year that was - then I realized you can go to the same article in JSTOR where there is better metadata.

The author Richardson is a medical doctor but his observations are a little broader than what one might expect. He also uses a somewhat extreme version of the kind of prose you meet if you read much from this time period.


From the first my impressions have been always in favor of cycling, and, to some extent, the expression of that favor on certain public occasions has, I think, helped to popularize the movement. I believe the exercise has been of the greatest service to large numbers of people. It has made them use their limbs; it has called out good mental qualities, and it has taken away from close rooms, courts and streets, hundreds of thousands of persons who would otherwise never have had the opportunity of getting into the fresh air and seeing the verdant fields and woods, the lakes and rivers, and the splendid scenery that adorn our land.

So far so good, assuming one can live with this sort of writing style. He soon transitions from positive comments about cycling, however . . .


There are dangers from cycling. The first is the danger of teaching the practice to subjects who are too young. Properly, cycling should not be carried on with any ardor while the body is undergoing its development — while the skeleton, that is to say, is as yet imperfectly developed. The skeleton is not completely matured until twenty-one years of life have been given to it.
. . . . .
We see these errors particularly well marked in the young, now that the cross-bar system of the cycle has come so generally into use. The tendency in riding is for the body to bend forward so as to bring itself almost into the curve of the front wheel, and in this position many riders hold themselves for hours, and the spine more or less permanently assumes the bent position. In plain words, the column becomes distorted, and through the whole life affects the movements of the body. 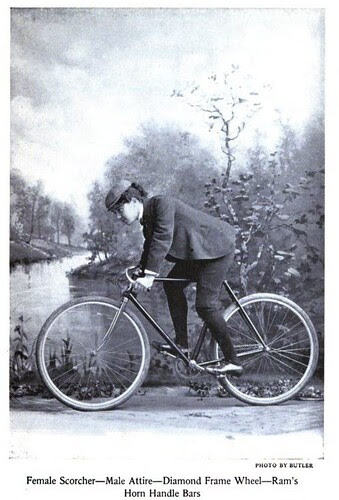 This rider from the 1890s looks like she could be exposing herself to health risks of various kinds, according to Dr. Richardson

But wait! It gets better - I particularly like this . . .


There is often developed in the cyclist a general vibratory condition of the body which is mischievous and is shown in various acts of movement and thought. There are certain unconscious or semi-unconscious movements of the body which become sensible to the subject himself at particular moments when great steadiness is called for, as, for instance, when sitting for a photograph. There is also shown an over desire for rapidity of motion, as if it were necessary at every moment to overcome time and curtail distance by labor of an extreme degree. Lastly, there is developed a kind of intoxication of movement which grows on the mind by what it feeds on and keeps the heart under the impression that it is always requiring the stimulation of the exercise.