I discovered this article about an early Schwinn "Quint" - a bicycle that seats five riders who would be able to attain a very high speed and a single rider would then try to set speed records riding behind them, drafting.

The Referee and Cycle Trade Journal: a Weekly Record and Review of Cycling and the Cycle Trade. Volume 17, Number 2 - May 14, 1896.
The article in the online presentation of this magazine. 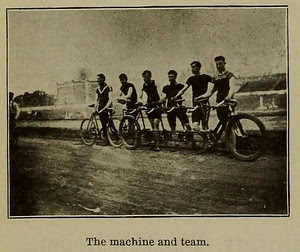 THE "WORLD" QUINT.
It is Exhibited on the Road and Track and Causes Astonishment.

The quint made by Arnold, Schwinn & Co., to be used in pacing Johnson, made its appearance last week and was given a trial at the Thirtyfifth street track. Kennedy made an attempt at Steele's state record of 1:55, but the track being in poor condition and the men not being used to the machine the best time made was 2:08. The chains on the machine were too tight to admit of its being ridden as fast as Kennedy was capable of going. The makers had figured on the chains stretching enough in riding the quint to the track to make them about right, but the chains didn't stretch. This fault was easily and quickly remedied, and the big affair was out on dress parade Sunday, the riders being clad in white suits. The boulevards were covered in the morning, a crowd of cyclists following at all times. The machine is a fine-looking affair, is substantial and ought to serve its purpose well. It has been shipped to the team in Paris. 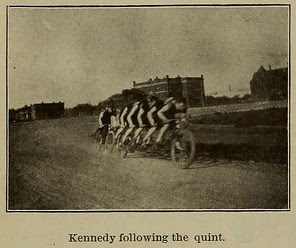 An "action shot" of the quint on the track
Posted by michael neubert at 12:14 PM