"Lamps On All Vehicles" (1896 Newspaper Article) 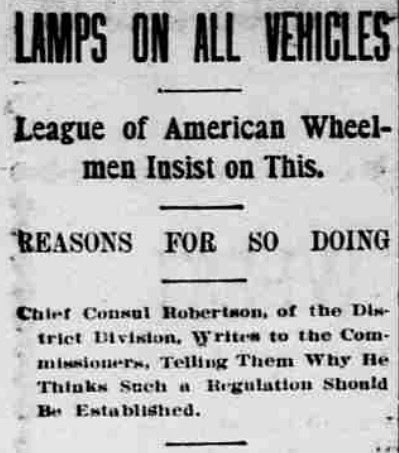 1896 article about lighting for bicycles and other vehicles

The article text is as follows:

The District division of the League of American Wheelmen is still working for the interests of the bicycle rider.

In answer to a request from the Commissioners, Chief Consul Robertson yesterday mailed to them his reasons for thinking that all vehicles should carry lamps [at] night. The letter reads:

"Gentlemen: In reply to your request that I should submit facts showing the necessity for all kinds of vehicles carrying lamps, I would respectfully submit the following reasons:

"Bicycles have been adjudged by the courts all ever the country as vehicles with equal rights on the streets and roads.

"Bicycles are required to carry lights. Private and business vehicles are not so restricted. According to this discrimination a bicycle for hire (which is a public vehicle) should be required to carry a light, but not the machine used as a private conveyance. 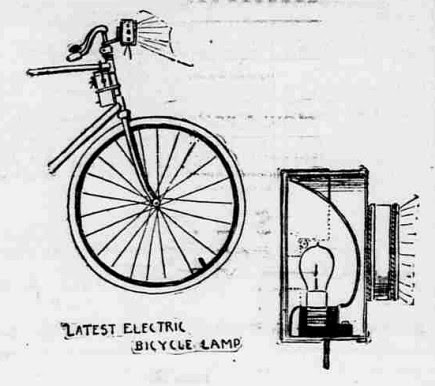 An electric bicycle light, shown in the article

"A number of business houses require their drivers to carry a light within or about their vehicles, more for their own safely than for that of others. This can also be said of some of the owners of private carriages. At times it is very difficult to determine the direction in which a vehicle is traveling, or on which side ot the street it happens to lie, by the noise occasioned by the horses' feet. A light would show just what part of the street it occupies. One might advance the argument that if it were approaching it would be on the left hand side of the street, and on the right hand side if going in the same direction. This would be so if everyone obeyed the rules of the road, but unfortunately, this is not so, and more wagons are on the incorrect than on the correct side, else there would be less necessity for lamps on horse-propelled vehicles.

"A carriage or wagon is often collided with by both bicycles and other vehicles. This is especially the case when drawn up alongside of a curb awaiting the owner. In this instance the horse, not being in motion, no noise is made. A vehicle in this connection occupies the same relation to the street as a pile of mortar or bricks, and should be provided with a light. It is it temporary obstruction, and one is more liable to danger than if it were known to be there, like mortar or bricks.

"A cycler generally leaves his lamp lighted when stopping before a house, because he knows his machine is in danger
of collision if he does not take this precaution.

"Therefore, I would respectfully request that all vehicle, be required to carry lamps.

Posted by michael neubert at 12:22 PM