A recent blog post, titled "19th Century Ride Etiquette for Women" on the Bicycling Magazine site looks at a list of Don'ts for Women Riders published in a Newark newspaper in 1895. Most peculiarly, the blog post leads with a photo of a group of young men with "ordinary" bicycles, otherwise known as "penny farthings". The photo is captioned in this way - "Were the early years of organized cycling a boys club?" (No credit is given for where the photo was found, which is kind of rude but oh well.) 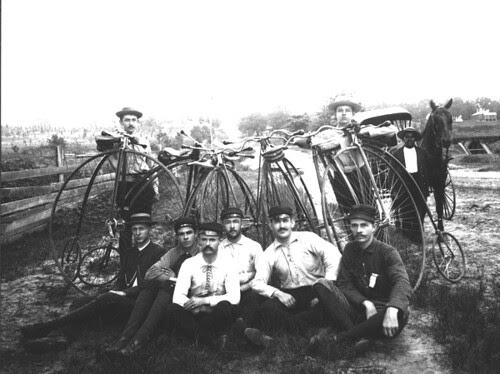 Eight young men with Penny-Farthing bicycles, from the State Library and Archives of Florida

As a number of the comments with the blog post note, these sorts of bicycles weren't much in use by the time of the 1895 article that is the subject of the blog post - the "safety" or "diamond" [frame] bicycle had displaced it completely in sales and almost completely in use. Certainly women did not start cycling in any significant numbers until the safety became popular. So apparently the Bicycling blogger searched Google images for "penny farthing" as a way to find a suitable "old" image, because a search on "group bicycles penny farthing" will include this image in the first page of hits. Now, it may have been confusing that the Florida librarian who cataloged this indicated, "Photographed in Tallahassee, Florida between 1885 and 1910" but the cataloger wasn't a specialist in bicycle history and presumably based that date range on the known period of time when the particular photographer was active - without better information than that, there isn't much choice. One would think, however, that someone working for Bicycling magazine might know (or be able to find out) what bicycles were common in 1895 and find a corresponding image.

To me even worse than using an image of the wrong sort of bikes is that it would have been easy enough to find an image of women with bikes from the 1890s - a Google image search on women bicycles 1890s brings up images of groups of just women and groups of men and women (and with the right sort of bikes). 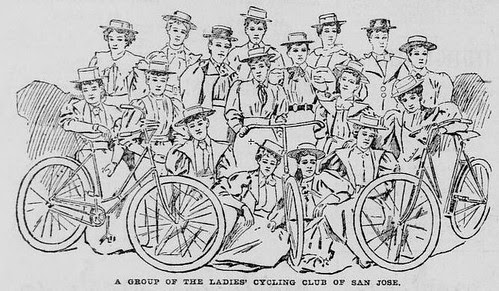 I also think that casting the newspaper article as "etiquette" isn't particularly accurate - it is far more all encompassing than that, covering virtually every aspect of cycling. One comment suggests that this over-the-top approach surely must have been intended as a joke, but there were plenty of similarly detailed instructional articles and even books written for cyclists in those days. Based on what I have seen, it wasn't even odd to cast an entire body of advice as "don'ts."

The list is pretty long, and for today's reader, many are amusing:

Don't be a fright.
Don't faint on the road.
Don't wear a man's cap.
Don't wear tight garters.
Don't forget your toolbag
Don't attempt a "century."
Don't coast. It is dangerous.
Don't boast of your long rides.
Don't criticize people's "legs."
Don't wear loud hued leggings.
Don't cultivate a "bicycle face."
Don't refuse assistance up a hill.
Don't wear clothes that don't fit.
Don't neglect a "light's out" cry.
Don't wear jewelry while on a tour.
Don't race. Leave that to the scorchers.
Don't wear laced boots. They are tiresome.
Don't imagine everybody is looking at you.
Don't go to church in your bicycle costume.
Don't wear a garden party hat with bloomers.
Don't contest the right of way with cable cars.
Don't chew gum. Exercise your jaws in private.
Don't wear white kid gloves. Silk is the thing.
Don't ask, "What do you think of my bloomers?"
Don't use bicycle slang. Leave that to the boys.
Don't go out after dark without a male escort.
Don't without a needle, thread and thimble.
Don't try to have every article of your attire "match."
Don't let your golden hair be hanging down your back.
Don't allow dear little Fido to accompany you
Don't scratch a match on the seat of your bloomers.
Don't discuss bloomers with every man you know.
Don't appear in public until you have learned to ride well.
Don't overdo things. Let cycling be a recreation, not a labor.
Don't ignore the laws of the road because you are a woman.
Don't try to ride in your brother's clothes "to see how it feels."
Don't scream if you meet a cow. If she sees you first, she will run.
Don't cultivate everything that is up to date because you ride a wheel.
Don't emulate your brother's attitude if he rides parallel with the ground.
Don't undertake a long ride if you are not confident of performing it easily.
Don't appear to be up on "records" and "record smashing." That is sporty.

Of course this was doubtlessly a list prepared by some man, who was obviously far more concerned with what a woman should not do (in his view) than what a woman should do. Bicycling for Ladies, written by Maria Ward and published in 1896, has a much more positive tone. 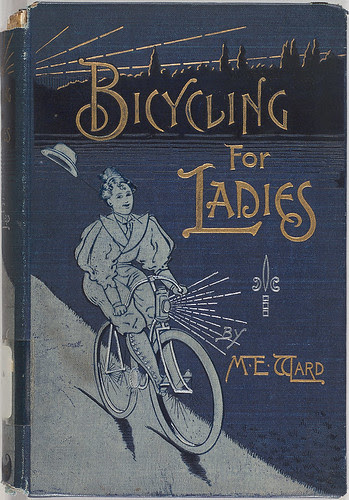 She is probably breaking at least ten "don'ts"
Posted by michael neubert at 5:26 PM