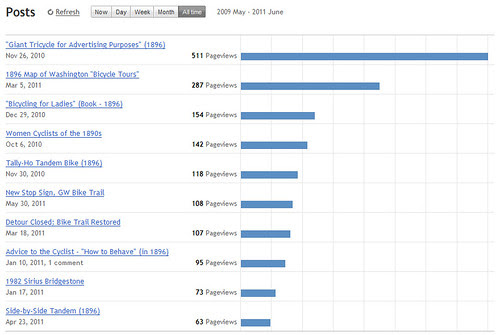 Screen shot of Blogspot most visited posts for this blog, for "all time"

I now have several hundred posts. Some are on fairly obscure things, but it turns out that my blog posts on these perhaps obscure topics will pop up fairly high on a Google search, such as the one on Arthur Conan Doyle's full quote on the benefits of cycling, so every couple of weeks, more regularly than I would have guessed, I can see that someone looks at that page having searched for its content with Google. My version is better (says I) than most "quote sites" because I have the full quote (typically it is reported only in part), and it is both transcribed and I have a page image of the Scientific American where it appeared in the first place.

So, for most of my pages traffic comes from Google searches (although often not just Google.com but Google-dot-some-other-country's-domain). I suppose it doesn't hurt that I use Google's Blogger and also have built up some content (with my 200 posts) and of course some of the stuff about cycling in the 1890s isn't that commonly written about.

Most the leading posts, however, have reached that status because a light went on in my head and I wrote the owner of some other, more popular blog and they published a link to one of my pages. Jan Heine's blog published a link as part of a sort of joke about fat-tired bikes to my post about a giant tricycle in 1896 and his hefty popularity (in certain circles) meant that this post had hundreds of page views in a few days and over time, went above 500 pageviews.

Similarly, I wrote to the guy behind the Washcycle blog about a lovely newspaper article about cycling in D.C. that included a great map and it has almost 300 pageviews. Several other high posts are mostly references from Washcycle.

Two posts about women cyclists of the 1890s are the top performers for posts I have done where the pageviews are driven almost entirely by Google (and other) searches and not be links from other blogs. Google searches have also driven higher-than-average pageviews for my posts on unusual old tandems and my description of my 29 year old Bridgestone. I have observed from the traffic source information that a fair percentage of page views come from Google image searches, so I generally try to include an image with my posts - or really, I guess at this point I am mostly inspired to post about topics that will have an associated image. 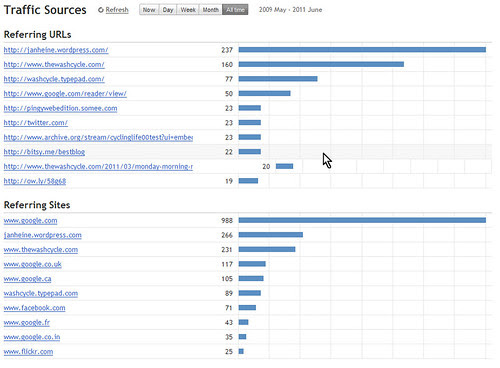 The traffic sources information confirms the importance of (a) other blogs, and (b) Google

A couple of these are oddballs. Someone once tweeted a link to a page with a photo of a bicycle built for four leading to several dozen page views and "pingywebedition" and a couple of other sources are simply a mystery.

My numbers are certainly not very large, but having figured out certain things about cycling, both today and yesterday, I find the evidence that these discoveries have been shared to pleasing. Also, I have built up traffic over time. The first year it was really quite negligible. After 24 months I have had 5,500+ page views total but over the past month, 800+, which seems respectable.

So, for anyone who has read this far, thank you!
Posted by michael neubert at 8:22 PM

Email ThisBlogThis!Share to TwitterShare to FacebookShare to Pinterest
Labels: bicycles