Obituary in the Washington Post for Harry Montague who designed full size folding bicycles, patented various processes, and created a company to sell them. 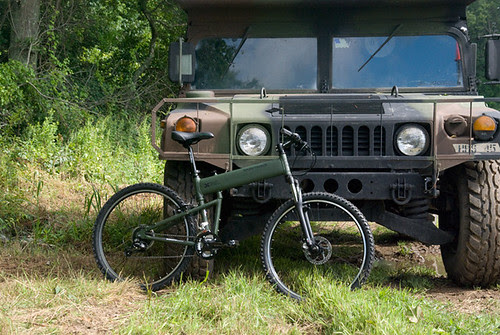 Perhaps the best known Montague achievement, a model sold to the U.S. military

The Montague "Paratrooper" shown above is a full size hardtail mountain bike with the added feature that it folds quickly and easily. The same bike can be purchased for "civilian use." Another version of his military bike, not available for civilian purchase (as far as I can tell) was the TENS, or "Tactical Electric No Signature" (as in radar signature) mountain bike, that had an electric power unit in the oversize rear hub.

Because a Montague does not have a "down tube" (the frame tube that runs from where the pedals are up to where the front wheel is) they are distinctive looking. I have seen a few on the bike trail. The Montague fills a niche for everyday users (not the military) but probably is limited in potential popularity even if they are cleverly designed and well executed. Certainly in terms of "breakdown" speed they are way ahead of using S&S couplers for a full size bike (that require messing, literally, with the chain and so on). But you still have close to 30 pounds of steel and rubber in two pieces (the front wheel is the second piece) that would need to be stuffed in a large bag and carried. Not necessarily easy for carrying along into an office building or on public transit in the way a Dahon or a Brompton would be (among others).

The guy I talked to who owned one said it solved a particular problem he had - he wanted a mountain bike he could take easily on his boat on an occasional basis. So for him, carrying a heavy-ish big sack isn't an issue. And the idea of having something that goes into a car trunk more easily than a standard bike rather than using a bike rack certainly has it's own appeal, even to me.


They are good looking bikes. Clever fellow. Also, David Byrne of the Talking Heads who traveled in recent years with a bicycle used a Montague.

This is an old post. Someone complained that I used a photo without permission, so I took the photo out and reposted. There may be some way of resetting the date to that of the original post so this doesn't look like a new post but I don't know what it is.
Posted by michael neubert at 6:29 PM