Parking in the Bike Lane -Moscow

Moscow site with nothing but photos of cars parked in what is the first dedicated bike lane in Moscow, near Moscow State University. The person posting the photos, on a more or less daily basis, is a chemistry student who one assumes is doing this as some sort of protest.

I think acclimating Russian drivers to cycling will be tough.
Posted by michael neubert at 12:45 PM No comments:

Sunday, mid-day - despite the excellent weather, not really that many riders out - any many were part of a local event supporting a national "Police Unity Tour" (by bike). The riders had event numbers on their clothes. 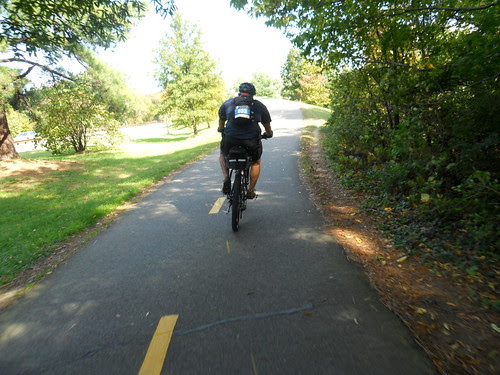 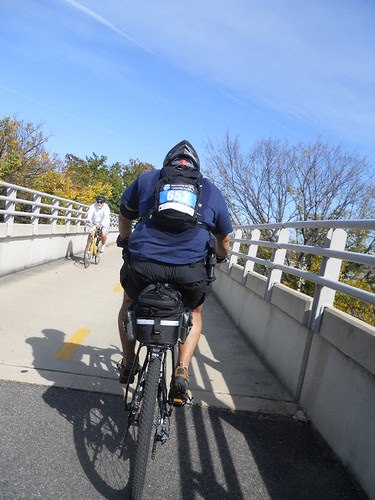 I guess maybe this is a work-related activity? I don't see the need for this guy to be riding with his sidearm. I wasn't able to work out what jurisdiction he was from.
Posted by michael neubert at 3:07 PM No comments: 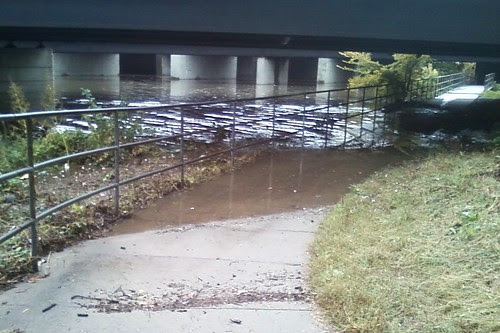 Minor flooding of trail along Four Mile Run under Route 1

This is part of my morning commute - the heavy rain combined with the tides can lead to some flooding at this location, the low point of the trail along Four Mile Run. You can see that earlier the high point was perhaps 2-3 inches above where it is now. There was one time last winter after one of the heavy snows when there was a heavy rain storm that also melted snow and the flooding was probably a foot higher than this - I pulled myself along the fence to keep from peddling underwater. This was a dumb thing to do since bottom brackets are generally not watertight and enough grease was washed out that the bottom bracket started to emit rather amazing creaking noises. Always learning something . . .
Posted by michael neubert at 9:51 PM No comments: 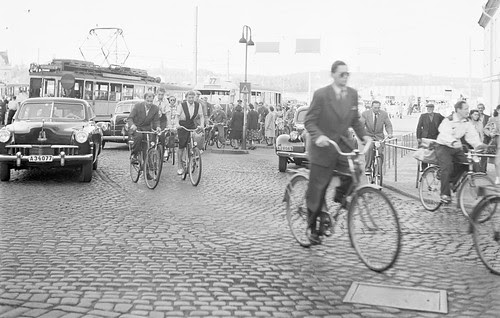 Photo from the Stockholm Transport Museum Commons in Flickr

Alas, for now it is the only one with bicycles.
Posted by michael neubert at 6:31 PM No comments: 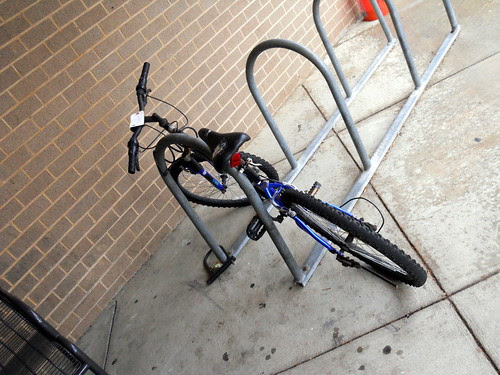 You can't leave your bike locked up at one location for more than five days, or it gets removed. To where is a bit vague. 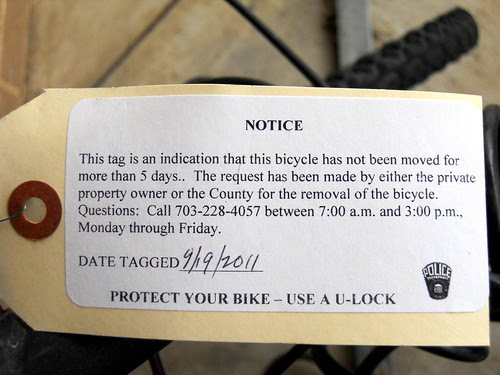 I guess we won't have any books published like Bicycles Locked to Poles with its photos of bicycles in New York City (in various states of disassembly, mostly attached to poles with chains as heavy or heavier than the bikes themselves).
Posted by michael neubert at 12:14 PM No comments:

The Wall Street Journal (that is mostly behind a paywall, so no point in linking to it) has an amazingly bad article titled "A Different Spin on the Dangers of Urban Cycling" - the first sentence states, "Two recent studies appear to expose cyclists as a potent urban menace." I guess for this fellow it appears that way.

The first study he quotes compares soot accumulation in the lungs of five (5!) cyclists who commute by bike in London with Londoners who don't. The cyclists had higher levels of black carbon in their lungs. When I think of something as an "potent urban menace" I am thinking it means to other people and not to themselves. But it says cycling is bad, so he tosses that into his article.

The second study has been reduced by the Internet (and the Wall Street Journal) to "500 pedestrians hurt by bikes in NYC a year." The study, done at Hunter College, was more nuanced that that and tried to determine if more or fewer pedestrians were injured by cyclists over a four year period - their conclusion was that despite more cycling and cycling infrastructure, the number has dropped (slightly). So this is a good metric - that is, even if we want to think that cyclists are a potent urban menace, it seems to be declining, or anyway not growing at the rate that cycling is growing. No one suggests that the 500 figure is good but there are questions such as, "compared to what?" and "is it going up or down?" that these articles typically ignore.

Different publications draw different conclusions - the New York Daily News takes the view it suggests a "need for tougher enforcement" which I guess is step beyond the Wall Street Journal position. But a physical fitness advocacy group takes the position that this is good news since the number isn't growing - "The city says that while bike use is up, the total number of accidents is stable. According to a Hunter College study, some 500 pedestrians are hurt each year by cyclists. At Bike New York, there is nothing but optimism." Kind of oddly put, but anyway.

This takes the "is the glass half full or half empty to new heights (or lows, depending on your point of view). And it does nothing for confidence in the Wall Street Journal.

Another point of view is provided by the trailer for the new bike messenger movie set in NYC - it makes it look like it is the messengers and the taxi drivers who are having dramatic traffic interactions.

Posted by michael neubert at 8:35 AM No comments:

A Kickstarter project for an e-bike that is fully funded. It is a very attractive design.

Since a $1,390 Kickstarter pledge meant one received one of the early bikes at a "special" price one can deduce that the expected sale price will be somewhere north of that. A Dahon electric folding bike with a more traditional derailleur shifting system can be had for around $2,000, so that's a point of comparison in the folding bike world. Performance has a Schwinn 8-speed comfort bike (no folding) with a 250 watt front hub for $999, which is probably the low(est) end for pricing for what is probably an OK (not for heavy use) electric bike.

Putting the battery in the frame seems lovely from a design standpoint but not necessarily very practical otherwise, but in the notes to funders, apparently it will be possible to attach supplemental batteries.

A strong advantage of this design compared to many e-bikes is that it looks to be reasonably light. In one of the videos, someone commented on the bike being light, which is hardly the first thing people typically say about e-bikes. The Schwinn mentioned above, near as I can figure out, must be around 50 pounds (or about 20 pounds more than it would otherwise).

Otherwise it has some issues, I think. Looking at the set-up, there appears to be a single brake lever yet one can see two brake units, front and back. A single brake lever that controls both brakes? I know this is technically possible but it seems highly undesirable. There does not appear to be any shifting mechanism for the pedal-drive system - the traditional drive system that the electric drive in the front hub supplements. Perhaps it just a single speed bike? And the use of a direct drive system rather than a chain (or a Gates belt drive, if one is insistent on getting rid of greasy chains) isn't something I find appealing, even if it is a elegant design element. I suppose since it is an electric bike, the loss of some pedal power due to the inherent inefficiency of direct drive is OK. Real bikes have tires that run on roads and sidewalks etc where there is dirt - in the rain, quite a lot of messy stuff, actually - so while you can get rid of the chain, folding the bike may still involve some mess.

At least this bike project got funded!
Posted by michael neubert at 5:27 PM No comments: