Looping the Loop - Another Approach 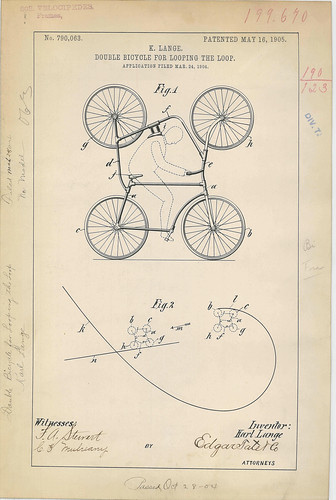 From 1905, a patent application drawing from the National Archives.

Completely unworkable, one assumes. And oddly, at the same time, a "daredevil" named "Diavolo" was doing loops without any need for a special bike like this. 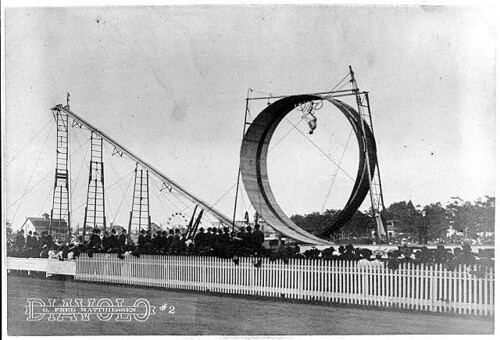 I blogged about this before; there are photos of this being done in 1903. So why the special bike idea? It doesn't seem like having wheels over your head would help of the bike fell across the loop.

Posted by michael neubert at 4:36 PM No comments:

Hyundai's Super Bowl Ad With Bicycle - Don't Get It


The bicycle is only at the beginning of the ad

Whatever it is that this is trying to say, I don't get. Apparently I am not the target audience, although I do have a Hyundai Elantra. Our Elantra isn't smart enough not to run over pedestrians. It isn't clear to me whether this one will or won't run over cyclists. I guess I would be interested in other people buying cars that won't run over cyclists.

What is the point of the bicycle in this?

Generally the few ads I have seen alluding to automated correction for distracted driving have been less obvious about suggesting that the car can compensate for this sort of oblivious behavior. I can't decide if this approach is good, recognizing that everyone is an idiot from time to time behind the wheel, or bad (for some other reason that I can't think of). Hmmm.
Posted by michael neubert at 9:28 PM No comments: 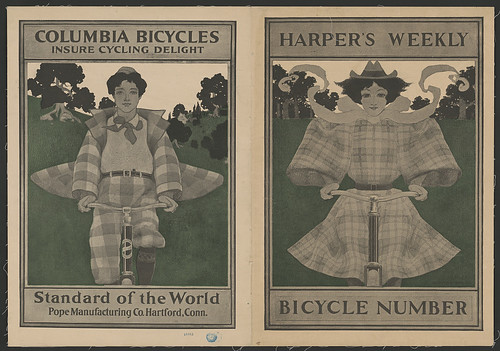 The image of the young woman on a bicycle was the cover for a special bicycle issue for Harpers Weekly for April 11, 1896. 1896 was the height of the "bicycle craze" of the 1890s. Unfortunately I can't find a full text issue of that issue online that isn't part of a commercial product. Hmmm.

The image of the young man on a bicycle to the left was an ad that was part of the special issue, for Columbia Bicycles.

I was able to determine the date of publication for the particular issue and asked that the information be added to this record in the LC system, which it was.

The bike shown on the cover of the issue is from the same angle and looks about the same as the one in the ad, but lacks the distinctive headbadge of a Columbia bicycle. Well, it is on the cover, not part of an ad. While what little is visible of the bikes is accurate looking, one wonders if Mr. Parrish ever rode a bike - it seems surprising to show riders with their thumbs not wrapped around the handlebars. But then if you weren't going to be pulling on handbrakes, maybe it would seem more natural to ride this way.
Posted by michael neubert at 11:05 AM No comments:

Email ThisBlogThis!Share to TwitterShare to FacebookShare to Pinterest
Labels: 1896, advertising

One of the pleasant parts of riding rather than driving is that it is easy enough to stop and enjoy the view.
Posted by michael neubert at 5:57 PM No comments: 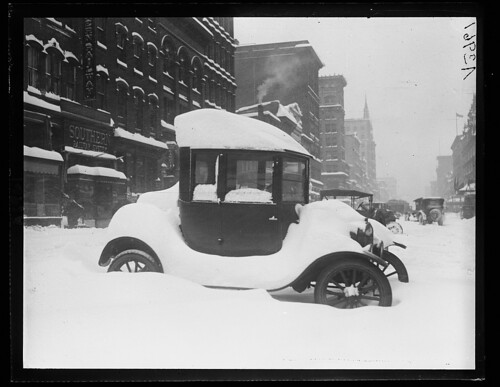 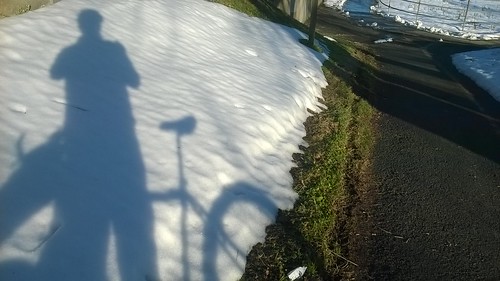 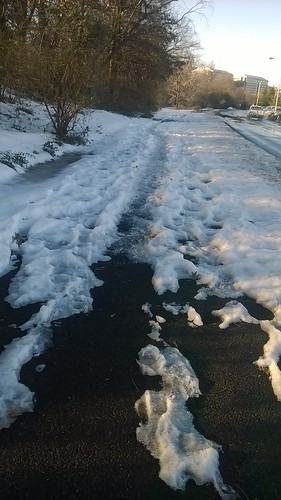 
Posted by michael neubert at 11:58 AM No comments:

Roberts' [bicycle] road map of the District of Columbia and adjoining portions of Maryland and Virginia. 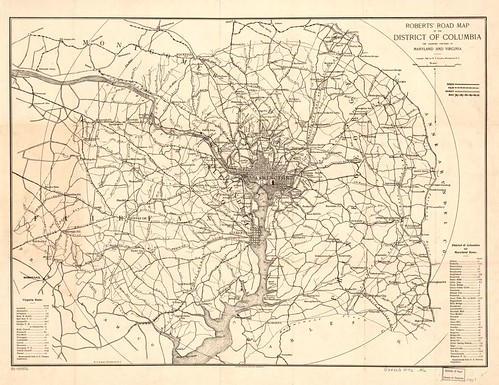 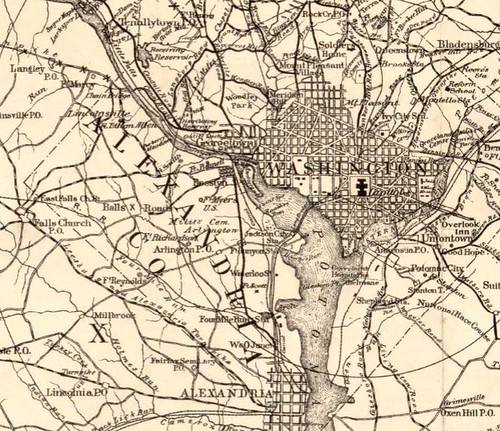 Indicators for quality of roads (for use by cyclists)

Distances are from the U.S. Treasury Department building and not the U.S. Capitol.

I found a similar, but not the same, map from 1896 published in the Washington Times that I blogged about.

I was reading a story in the Washington Post about changes coming to Arlington County council in the new year.

There is this, with a quote from Council member Libby Garvey: Garvey warned that local government should not “overstep our role and risk stifling innovation,” particularly in regulations such as the sign ordinance, which took more than a year to revise. “Part of the charm of Arlington,” she said, “. . . is how not standard everything is.”

I am not sure what "sign ordinance" is being referred to, but I don't much care for non-standard, inconsistent application of signage to traffic control affecting cyclists - but I don't have to go far to find some, given a recent change to the trail near my house.

Down the street from my house on South Dinwiddie Street, there is a trail that is an offshoot of the WO&D trail, that is parallel to the Lucky Run (stream). 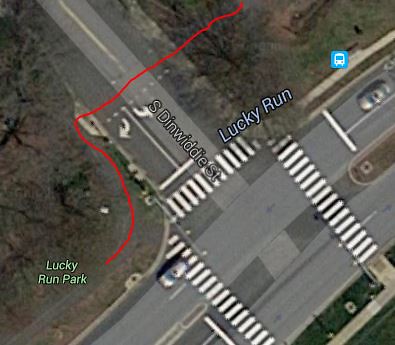 The trail is shown in the image above, with the red line. Somewhat unusual I would say, there is a standard sidewalk and crosswalk at the intersection, then 40 or so feet back on S Dinwiddie, there is the crossing for the trail. It is not painted as a crosswalk with zebra stripes, but there are some dashed lines to show it is there to drivers. There are yellow yield signs controlling pedestrians and cyclists on the trail who would cross S Dinwiddie St.

Meanwhile, just a quarter mile away, the trail crosses S Wakefield St in a similar way but the traffic control is completely different. 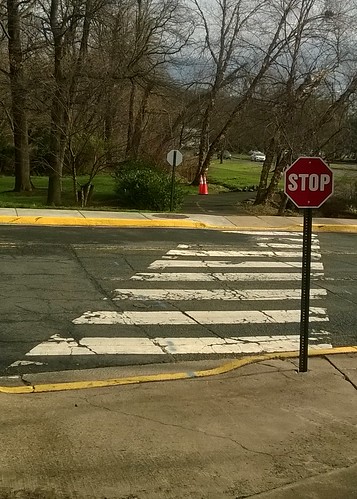 These stop sign appeared about a month ago - previously there was not signage here controlling pedestrians and cyclists on the trail where it crosses S Wakefield St. (Yes, the stop sign are not full size, but sort of toy size for some reason.) And the crosswalk is painted with full zebra stripes. 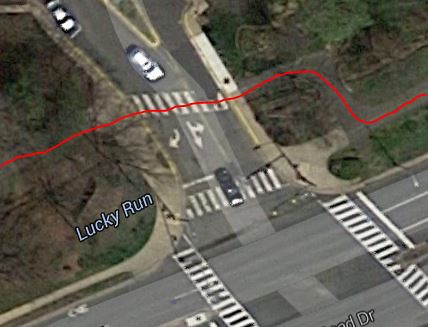 Here you can see the situation, much like at S Dinwiddie St, with the trail crossing set about 40 feet back of the crosswalk that is the intersection.

I don't understand how it is that Arlington County thinks these intersections are supposed to work successfully. In general, if a motorist sees me in the "not quite a crosswalk" for the trail crossing, they stop - but I can't count on it. And apparently at one of the intersections (Dinwiddie) I am merely to yield, but the other (with full zebra stripes!) requires a full stop! WTF, to use the vernacular (or vulgar - whichever).

Consistency in these matters could be a good thing, even in quaint Arlington County. This is a real safety issue, after all.


Posted by michael neubert at 11:30 AM No comments: